Thirteen Ways to Steal a Bicycle:
Theft Law in the Information Age

Theft claims more victims and causes greater economic injury than any other criminal offense. Yet theft law is enigmatic, and fundamental questions about what should count as stealing remain unresolved―especially misappropriations of intellectual property, information, ideas, identities, and virtual property.

In Thirteen Ways to Steal a Bicycle, Stuart Green assesses our current legal framework at a time when our economy increasingly commodifies intangibles and when the means of committing theft and fraud grow ever more sophisticated. Was it theft for the editor of a technology blog to buy a prototype iPhone he allegedly knew had been lost by an Apple engineer in a Silicon Valley bar? Was it theft for doctors to use a patient’s tissue without permission in order to harvest a valuable cell line? For an Internet activist to publish tens of thousands of State Department documents on his Web site?

In this full-scale critique, Green reveals that the last major reforms in Anglophone theft law, which took place almost fifty years ago, flattened moral distinctions, so that the same punishments are now assigned to vastly different offenses. Unreflective of community attitudes toward theft, which favor gradations in blameworthiness according to what is stolen and under what circumstances, and uninfluenced by advancements in criminal law theory, theft law cries out for another reformation―and soon.

An expert on white collar crime says the entertainment industry’s efforts to label illegal downloading as theft are not being taken seriously. Read more…

A meme about illegal music downloads has been going around the Internet for a few years now. It goes something like this: Piracy isn’t theft. Theft removes the original. Piracy makes a copy. Stuart Green, from Rutgers Law School, thinks that there’s something to the idea that the strict legal definition of theft doesn’t really capture what’s going on in music piracy and other forms of intellectual property rights infringement.

THE Justice Department is building its case against Megaupload, the hugely popular file-sharing site that was indicted earlier this year on multiple counts of copyright infringement and related crimes. The company’s servers have been shut down, its assets seized and top employees arrested. And, as is usual in such cases, prosecutors and their allies in the music and movie industries have sought to invoke the language of “theft” and “stealing” to frame the prosecutions and, presumably, obtain the moral high ground. Whatever wrongs Megaupload has committed, though, it’s doubtful that theft is among them. Read more…

I’m always annoyed when I go to my local pharmacy to buy razor blades and have to ask a clerk to unlock the two-inch thick, bullet-proof case where they’re stored. You’d think I was asking to see the crown jewels. Still, it’s easy to see why stores take such measures. Gillette Fusion Power blades may give you a close shave, but an 8-pack sells for the extravagant price of $26.99. Without the locks, some people might be tempted to stick a pack in their pocket and walk out of the store. Read more… 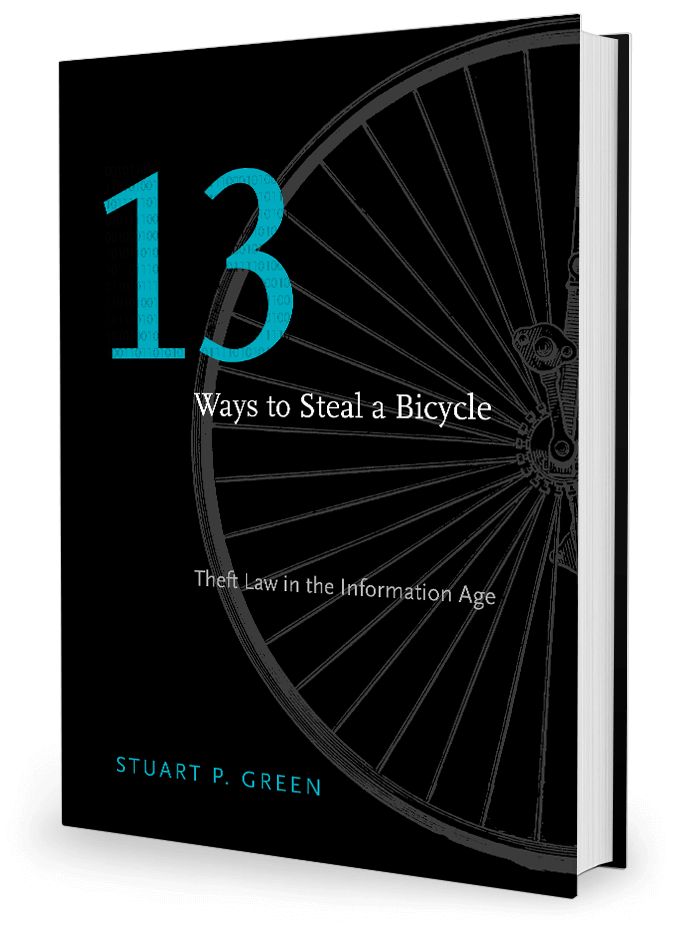 “[A] book of extraordinary richness…. Thirteen Ways is one of the most interesting and imaginative books I have ever read.”

“Green’s impressive achievement is to provide us with simple tools for thinking about [the complexity of theft law] clearly. In his view, the consolidating law reforms of the 1960s got rid of needless complexity and archaic categories . . . .But in doing so, reformers flattened out important moral differences and lumped together offences that ought to be distinguished. Green takes us back to basics, analyses the issues, and reconstructs a conceptual scheme flexible enough to deal with ‘theft in the information age’ as well as more traditional forms.”

“Drawing on a plethora of real-world examples–from the internet user who accesses a store’s wireless network from his car, to the Florida man who falsely asserted that he had won the Medal of Honor, to Mark Zuckerberg’s alleged theft of his classmates’ social networking website idea . . . Green demonstrates how changes over the last half century have rendered theft law wholly incompatible with its moral foundations. Thirteen Ways to Steal a Bicycle offers conversation-sparking principles for reform that will aid politicians, jurists, and scholars alike.”

“The book is a great theoretical introduction to theft law. Highly recommended.”

“Who could resist a book with such a tempting title? This is an engaging and innovative  reconsideration of the law of theft and — more importantly — of the behaviours that might or might not, should or should not, be labelled as criminal. . . . Thirteen Ways to Steal a Bicycle is a delight to read.”

“Stuart Green has already produced a substantial body of work, which has become central reference in the field. [Here] he deals specifically with theft, its wrongfulness and its normative-conceptual boundaries. It is a thorough and comprehensive study of the offence of theft–indeed, the first of its kind–and it tackles pressing questions, which have so far largely fallen by the wayside of normative criminal law theory. The book is incredibly rich in content and full of fascinating insights on various levels of abstraction.”

Green “performs a tour de force in his comprehensive treatment of the historically rich and in parts still controversial law of theft.” The book “impresses with its breadth yet also insightful detail . . . [providing] the most thorough account of the foundations, logic, and tensions of theft law . . . [and] giving an unparalleled overview of an important and strangely neglected field.”

“Groundbreaking in every sense, Thirteen Ways to Steal a Bicycle lays the foundation for the serious study of the law of theft. No one will be able to write on the subject of property offenses without learning from Stuart Green’s book.”

“Thirteen Ways to Steal a Bicycle is a tour de force—as wonderful as its title and as fascinating as its subject. Theft law is strange and this book tries to explain that strangeness—why it matters so much just exactly how something is stolen, by robbery, larceny, fraud, or other means; why only certain things are considered capable of being stolen; why the theft of electricity, sexual services, or glory are so problematic. This is a work of first-class scholarship, in addition to being just plain fun to read.”

“Theft law, that vital but underexamined part of our jurisprudence, gets its best contemporary treatment from Stuart Green. This book is at once a comprehensive treatise, a pedagogic tool, and a provocative argument of both moral philosophy and social policy. Especially as we focus increasingly on intangible property, Green’s book guides us to a fresh inquiry into what ways of taking things—and what things are taken—should lead to criminal condemnation. It will dominate discussions of theft in the coming years.”