Lying, Cheating, and Stealing
A Moral Theory of White-Collar Crime

The picture of crime that dominates the popular imagination is one of unambiguous wrong-doing – manifestly harmful acts that are clearly worthy of condemnation. The accompanying picture of the criminal – the thief, the murderer – is a picture of society’s failures – to be cast out and re-integrated through a process of punishment and penance. Our understanding of white-collar crime, by contrast, is pervaded by moral and imaginative ambiguity. Such crimes are committed by society’s success stories, by the rich and the powerful, and frequently have no visible victim at their root. The problem of marrying these disparate pictures has led to a confusion of the boundaries of white-collar crime. How is it possible to distinguish criminal fraud from mere lawful “puffing,” tax evasion from “tax avoidance,” insider trading from “savvy investing,” obstruction of justice from “zealous advocacy,” bribery from “log rolling,” and extortion from “hard bargaining? ” How should we, as scholars and students, lawyers and judges, law enforcement officials and the general public, distinguish the lawful from the unlawful, the civil from the criminal?

In the first in-depth study of its kind, Stuart Green exposes the ambiguities and uncertainties that pervade the white-collar crimes, and offers an approach to their solution. Drawing on recent cases involving such figures as Martha Stewart, Bill Clinton, Tom DeLay, Scooter Libby, Jeffrey Archer, Enron’s Kenneth Lay and Andrew Fastow, and the Arthur Anderson accounting firm, Green weaves together disparate threads of the criminal code to reveal a complex and fascinating web of moral insights about the nature of guilt and innocence and what, fundamentally, constitutes conduct worthy of punishment by criminal sanction.

Green argues that white-collar crime is best understood through a framework of everyday moral concepts that include not only lying, cheating and stealing, but also coercion, exploitation, disloyalty, promise-breaking, disobedience, and other forms of deception. In the process, he reveals the essentially moral fabric underlying the legal category of white-collar crime. 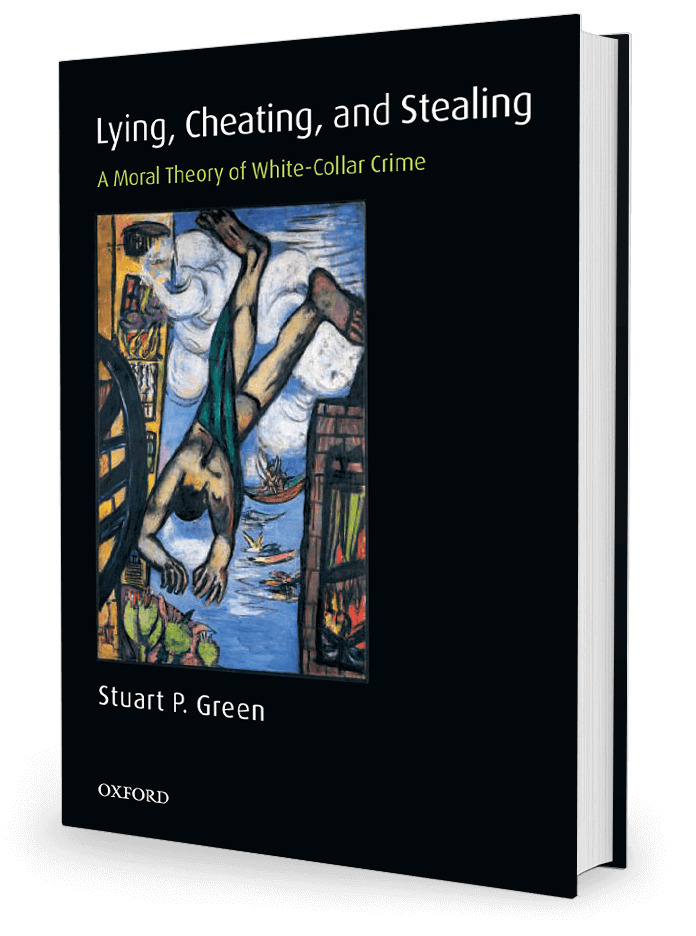 “Lucid and informative . . . Green’s book admirably clears away much of the conceptual underbrush surrounding the idea of white-collar crime. It is a category of wrongdoing, he makes clear, less easily grasped by our ordinary intuitions of right and wrong than, for instance, violent crime. . . Lying, Cheating, and Stealing is strong on moral philosophy, not least in the way it illuminates the gray areas of business conduct.”

“Green is a legal scholar who is extremely well versed in moral philosophy as well as legal theory. . . . This book is clear, well-written, strongly argued, very well researched, and significantly original. Green’s analyses of the concepts he discusses are particularly well-done. I recommend the book to anyone interested in the topics it addresses.”

“Green has set down a fascinating and ground-breaking case for a close alignment between legal and everyday norms, and has presented an exploration of our thick moral concepts that is interesting in its own right. This is a fine text and one that deserves to be the focal point for future discussion.”

“Stuart Green’s new book, Lying, Cheating, and Stealing: A Moral Theory of White-Collar Crime, is a superbly written book that will be of wide interest to criminal law scholars and practitioners alike. . . . [I]t illuminates a wide a range of criminal offenses . . . and merits careful attention and repeated readings by those with an interest in the field.”

“[Lying, Cheating, and Stealing] is in many ways a Catherine Wheel of ideas on how to theorise [about white collar] offences and their moral content. It is a rich source of ideas for further discussion, and is likely to be a much cited book, providing as it does a collection of provocative perspectives with which to interrogate the boundaries of criminal law in general and to justify individual offences.”

“[In]tricately crafted, learned, and frequently illuminating . . . . Lying, Cheating, and Stealing is a wide-ranging and ambitious book. . . . [O]riginal . . . engaging [and] smart, it is well worth reading by anyone interested in white-collar crime, or in the relationship between conventional morality and crime more generally.”

“This is a long needed and pathbreaking consideration of white-collar crime from the perspective of a top-notch legal scholar. Stuart Green has absorbed knowledge in his own specialty and in the social sciences to provide a comprehensive and integrated understanding of behavior that has been capturing headlines in the American media. Tough issues, long bypassed, come in for sophisticated scrutiny. I am certain that Lying, Cheating and Stealing will come to stand as a classic contribution to the study of law-breaking by the privileged.”

“This is an important book, which opens up the vast field of ‘white-collar crime’ to deep normative theorising — theorising that is informed by an acute grasp of the legal issues and by a thorough philosophical grounding. . . . Th[e] book marks a real advance in normative theorising about the moral foundations of the criminal law: it should provoke theorists to think not just about murder, but about insider trading; not just about rape, but about tax evasion — and about the wide range of ‘regulatory offences’ whose moral content has been so under-explored.”